A Love that Stands The Test of Time 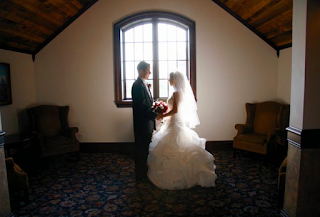 "Stick by your man, even if he dies"  was the advice my grandmother gave my sister at her wedding shower and it stuck with me ever since.   She was 89 years old at the time and told things like they were.  There was no more fluff, there was just real.  Behind this statement was a love that stood the test of time, a lasting love that she hoped my sister would also experience.  My grandfather had passed away when she was only 58 years old and their 5th child had just become an adult.  He was her one true love, her soul-mate.  She'd never find another him.  She never wanted to.  My grandmother lived to be 90 (she spent 32 years without him).  I was there when she passed away and I can promise you that she was reunited with my grandfather in that moment.  I had never before seen a smile on her face as big as the one she had when she took her last breath.  Seeing her love for him is one of the great love stories of my lifetime.
I was 21 years old at the time she passed away and wondered "will I ever find a love like that?"And that same year,  I believe I did when I met my future husband.
I'm feeling a little sappy (more than usual at least) as my wedding anniversary is just one week away.  I've been thinking a lot about my husband and our relationship over the years.  From our college days at his fraternity house to 13 years later as we are now the parents of two little boys. Our life and our relationship has changed in so many ways during that time.  But the one thing that remains unchanged is that I'm sure he is my one true love.  I loved him long before we had children for so many different reasons - he is the most handsome guy I've ever met both inside and out, he makes me laugh like no one else, he's always been able to see through me and he has an unbelievable level of patience that I continue to learn from every day.  With all of that I'm amazed at how deep my love for him has grown as I've watched him become a Dad.
You often hear that having kids can put a lot of strain on your relationship.  Its absolutely true.  Kids require so much of each of you that its easy to stop putting enough focus on each other.  And in these early years there is a lack of sleep that is sometimes so hard to get past.  While we are together as a family all the time, our little ones tend to take the center stage and its easy to forget simple things like holding hands and asking about each other's day (not just "when was the last diaper changed?" and "did you tell him he could have a cookie?") I know I'm definitely guilty of that more often than I would like to admit.    And I spend a lot of time pointing out stupid little things I wish he would do different.  "Don't do his time outs like that.  Don't let him watch that.  Why would you put that outfit on him..   Don't... Don't... Don't..."  The truth is that the only reason I have such a silly list of don'ts is because he IS so involved and does SO much for our family.  Unfortunately, like many Moms, I tend to be a control freak about everything with my kids.
Too often I forget to point out the million and one things he does that amaze me each day.    The fact that he plays songs on his guitar for our boys to sing along to nightly.  That he teaches them to love & respect their Mama.  That he does a long list of chores every single day including picking the boys up from daycare and making their dinner before I even get home.  That he can fix anything from the tiny little wheel on a die cast car to the latest boo boo on our son's knee.  That he has a way of making me feel good even on my worst days.  That he happily reads a whole stack of books over and over again for my son when I know he has other things to do.  That he always puts our family first, even before himself.  That he has the patience to teach an impatient 3-yr-old how to fish.  That he is thrilled to be planning my son's first camping trip in our backyard.  That he has made the weekly grocery shopping trip a special event between him and my son that my son looks forward to all week.  (yes, he does our grocery shopping!) That he can see past my "I'm fine" and know when I need a break or a nap or that I forgot to feed myself because I was too busy with the boys.  The list goes on to 1,000,001.
So this year as I'm re-defining myself and what success looks like for me, I'm on a mission to appreciate those million and one awesome things my husband does, to take more time to focus on him and demonstrate for my children what a love that stands the test of time is.  May we all have a love like my grandparents.

I am 22 days and 7 hours from moving across the country (from Arizona to Illinois) with my hubby, three kids and our dog.  Our house is currently covered in boxes.  Our kids have so many questions.  I'm happy one minute...  stressed the next...  and sad 2 hours later!  It's really such a roller coaster of emotions. Change is nothing new to me, my husband or our kids for that matter.  We've moved and changed jobs or situations more than most.  In fact I'd say I actually thrive on change and get bored rather quickly.  At work, I focus on website optimization which means I'm constantly trying to improve the areas of the site I've been assigned.  We try new things.  We learn from them.  Repeat.  I think I've been happy in this type of role for so long because it really is a journey, not a destination.  There's no end point.  There are wins and losses along the way.  But no matter how much optimization we do this year, there will be more to do next year.
Read more

I was 27 years old when I got married 10 years ago.  My husband and I lived in the city of Chicago...  and then the suburbs.. and then back to the city... and then to Arizona... We were always on to a new adventure searching for fun and excitement.  We were still figuring out who we were and what our life together would look like.  We were both working very hard at corporate jobs trying to prove ourselves in hopes of getting the next promotion.  We loved meeting for happy hours after work, going out on weekend nights and sleeping in late every Sat and Sun.  We moved a lot.  We went on trips.  We made decisions on a whim.  We basically did whatever we wanted.  Our biggest responsibility was our pets.  The plan for our 10 year anniversary was always to go on an African Safari.  It would be the trip of a lifetime full of thrill and adventure.  It would be extraordinary .  And I think at that time in our life we wanted nothing less than extraordinary.     Fast forward and here we are
Read more

I set my alarm for 5am, the alarm I hadn't set in 2 years.  I have 3 kids and as a stay at home mom I could always count on one of them to make sure I was up.  But today I needed to make sure I was awake even before my kids.  I had so many things to do and such little time to get them all done because today was my big day - the day that I would re-enter the workforce... I looked at the checklist for the morning and got to work: clean the floor clean the bathrooms pick up the poop in the backyard shower/get ready cut up fruit for the kids to have with lunch get the kids fed and dressed for the day print out the instructions for the nanny (even though I had sent her the doc days in advance) bring I9 docs for orientation don't forget to eat breakfast don't forget to tell the nanny about how Rocky sometimes gets stuck in the baby room and wakes her up, how the boys can play with the hose in the yard but they forget to turn it off, how...... (you get the point) Lo
Read more

Sue Pierce
Welcome! I’m Sue. I’m 41 years old and I am fortunate to have an amazing husband, two boys and a girl that teach me something new about myself and the world around me on a daily basis. I started blogging years ago when I was struggling with work/life balance as a working mom. I lived "the secret life of a working mom" for 3.5 years before making the decision to quit my job and become a SAHM. I was a SAHM for about two years and then decided to go back part time. I find blogging to be very therapeutic as it helps me work through my many spinning thoughts. Like many mom’s I often find myself feeling like I just can't win! I’m generally a positive, glass-half-full type of gal so I hate that feeling! And I’m a strong believer that I always have a choice to either make a change or at least change my view. So.. I’m on a mission to re-define what success means for me and start celebrating more of the big and little wins along the way. Sue <3